It was a very small amount of time that I was working in the game industry. It was about 1 month over 10 years ago. I was a java mobile developer, J2ME to be sure. The company which I was working got out of money and closed. And I left game industry never been there enough to smell the taste of programming games. But I alwasy want to create games. When I was a young man, we're playing Sega and Nintendo all the time. And as I remember, from that time, I always want to make a games. No ideas, no scenarious, bad hand on painting... But the idead to making games..
There was and idead to make an own arcade platformer engine, just how it was on Nintendo! And today I proudly(!) presents you results of my 3 year work. It was a strugle to locate the time for this hobby while I was studying at university and working on full-time job.
I decide to make the clone of Ninja Gaiden. The famous game from Nintendo. The engine was written on Java2ME language. Without using MIDP2 methods. The game is multiscreen, it works almost on all devices. it was checked on e61 (320×240), SE K530 (176×220).

Level editor was developed in Delphi 7. It's Object Pascal for Windows, if you forgot. It can do:
Make the game map in 3 layers. Placing/Moving/Deleting game objects. Game objects are the enemies, breakable lighters and level teleports triggers.

Creating game objects, animation, collision boxes, name changing. Sprites animation could be in one or multiple files. Animation can be viewed in editor.. 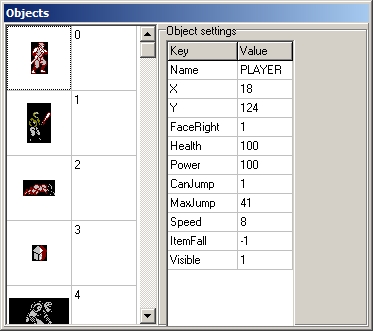 There is a trigger function for non-moving objects. For example, this trigger can change the properties of the other objects if current object was destroyed. This could be checked when the lighter get punch from the player, it removed from the map and oter object appears.
Trigger control. For this moment there is only one active trigger - level change. Previously there were camera trigger and dialogs, but I didnt like how they works and removed them.
Main character can't take items and can't use ladders. Enemies can't throw or shoot.
The music on the levels in MIDI format.
Graphics for the remake was taken from the emulator's screenshots. Tiles file was created and carefully one by one placed in level editor. For this moment I've made only 2 levels plus 1 boss level. Sprites were taken from the open resources websites.

Check the game running in emulator in the video below:

Developing games in J2ME is dead idea. Better use other modern technology.